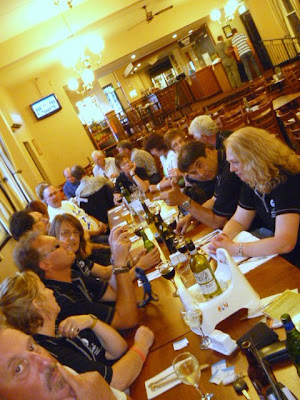 Full Moon Loonies showed up in arms at the Furners Hotel in Ulverstone. After a casual 12km stroll around Ulverstone we descended with fury and vengeance into the hotel. Even the off-duty hotel manager had to query us on the use of the potty with ice on the table.

After making a good mess of both ourselves and the venue the foolhardy true blue loonies proceded to Flasher's abode to perform the monthly ritual from his deck. White flesh was bared in honour of and in the direction of the moon.

Fully sated for yet another month of waning and waxing we will gather again at some venue yet to be disclosed at a later time just before Nash Hash weekend!!