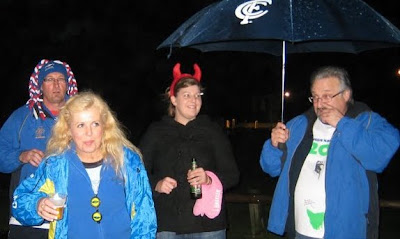 The second NW Lunar Hash was run last Thursday, set by Flasher. We all gathered under the storm clouds awaiting a torrential downpour. As soon as GoneAgain had finally ComeAgain with Mullet the pack scurried off in the direction of the Formby hotel for beer and tucker. Good to see a good Burnie/Launy attendance, we are the NW Lunar Hash after all. Ballpoint and CremeBroule showed up with their new bub who was immediately christened half-moon or something frivolous.

When we were all tanked we decided to brainstorm the NW Hash and decided that if a Full Moon coincided with a NW Hash Run we would have it there. That means Sundays in Burnie, Mondays in Devonport, and Tuesadays and Thursdays in Launceston.

As soon as we ready to be kicked out we proceeded down Stewart Steet, stopping at Dint's office where his colleagues immediately called the cops. Cops were obviously too intimidated by us as they didn't show up till we had cleared the premises.

Mullet danced with PhayWray's umbrella and the rest of the pack shuffled their way back to the cars in a relatively orderly but loud fashion. The circle was held in the rain, and lacking a moon we mooned a passing car and a dark house.

Dini took pics: <here>. In fact she took some good shots of Lunar Hash Run I too, check them out <here>.