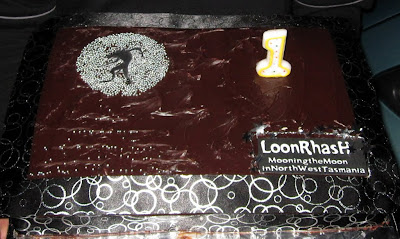 Here is Dini's Pièce de Resistânce!
Click on cake for more photos!
at 6:42 PM No comments:

Picture this.... Shearwater Country Club in NW Tasmania on a clear full moon evening ... crystal clear Moon; just what the Doctor ordered... Hashers expected any minute....the Hare is calmly drinking a guinness and smoking a cigarette when  panic sets in...Oh bother!!... many Hashers have headed to Brunei for the good of their livers... who will turn up to "Moon the Moon??".. No problem! we'll import some!!...  at great expense we imported two Fabulous members into the Back Door of the Country Club! Hobart ..we found one from there...the hare breathed a sigh of relief...we had a quorum!  so with the dedicated few who didn't need to de-tox their livers in Brunei we had more than the Full Moon crew in Hobart... Grand Loon Black Tracka took control and led the gallant band into darkest Shearwater... Bastard trying in vain to usurp his authority but we weren't fooled ... we know about him!! A stroll round the lanes with a dash across the deserted golf course and back to the Country Club for food. Two pseudo Hashers Cindy and Emily left us here ... it was past Emilys bedtime! (she is only 4) The rest of us ate and drank. Tracka ran the best raffle ever! It was a quiz!! (Memories of the McBollocks triumph with the quiz at the Highland Fling!!).. only one prize won fairly and sqarely by A Bit of This and taken away to be drunk at Burnie Hash on the morrow!! When we went out to "Moon the Moon" a strange thing had happened! there was a big blob covering the lower half of the Moon.... suggestions were rife but the balance of opinion was it was Grizzlys rear waiting for a drink in Brunei!!