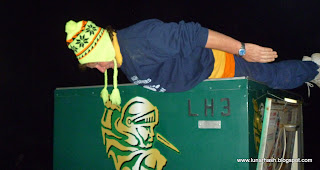 Inlet showing us Safe Planking Procedures (SPP) as approved by the PRC (Planking Regulation Committee). The site was approved and licenced by LH3's SSPA (Site Save Planking Advisor) OneHump.

The trail began near “The Pub With No Counter Meals” and was led by Fingers and Bend Over who were at this stage, still on speaking terms [But more of that later]. This particular trail
had in actual fact been set from a car and thus led around the block. One Hump had used massive flour arrows - just in case “God Forbid” - Dini should miss one. When the arrows reached the park One Hump couldn’t drive across it, so he had to drive around to the other side and re-start the trail. This act inserted the one and only brief moment of excitement on the whole run. Hashers were able to call “Are you on?” and Hashers who crossed the 20 yard park were able to call “On On”! Great stuff. The On Home was found down on the corner— So, no Checks, no False Trails, no nothing - and it took all of 10 minutes.! Ringo was heard muttering to Tracka “I told you One Hump would set a shit run!” Incomming Hashers were greeted by a warm fire, chairs, lighting and plenty of beer, so One Hump at least got that right I decided to return via the pub to photograph the usual Sludge Arses sitting in there, but it was closed! They could have sold at least 20 counter meals and an equal amount of booze!

Next Lunar Hash will be set by Hare Puss in Boots from Foot Street in Hadspen on Thursday 16 June 2011AD.

Devoted Loons should gather under the full moon at Carrick on Tuesday May 17th at 6.30 for 7pm stroll and pub meal, and of course medicinal tonic. Weather permitting, the Launny trailer and firepot will be in attendance nearby in case of thirst aid emergencies.

The symbol of the Hare gazing at the moon indicates fertility, longevity and rebirth, so all due precautions should be carried, otherwise they may not let us into the pub.

and PS. NW Hasher will meet at Sherry Shed in Latrobe at 530pm!!