Yes LoonRhasH needs to be billed as March 1st as the actual full moon interferes with the Charitable Red Dress Weekend in Hobart. LoonRHasH is not keen to compete with charity as we are far from charitable until we can afford our own T-shirts at least. Much as it goes against the grain to agree with common senses (and bastards like Bastard), we do need to make sure that we moon the moon and so we, and may I humbly add successfully, lobbied the Lord in Charge of our Heavens to postpone the full moon just this once. 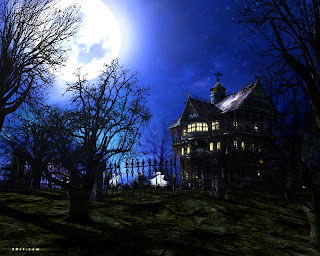 Artist's Impression of Thrust's House at 930pm March 1, 2010.
All you Hashers out there let it now officially be known that the new gazetted time for the Full Moon above the NW Coast of Tasmania is on Monday March 1 exactly as the webwanker of this site had originally predicted and will be held at House Thrust in Turners Beach (66 TB Road).